Another day, another remake/reboot from Disney+. There were rumors that Disney was planning on making a ‘Three Men and a Baby‘ reboot with Zac Efron set to star.

And now we are hearing that the project is moving forward and Mo Marable will direct. He has been a pretty prolific director in the television world, so it’s nice to see him making the switch to features.

For those who don’t know, the original ‘Three Men and a Baby’ was released back in 1987. It starred Tom Selleck, Ted Danson and Steve Guttenberg “as New York bachelors who find themselves caring, and subsequently, falling for, an infant.”

The movie was a huge success at the box office. It was the highest-grossing film of 1987 domestically. It was also the first live-action Disney film to cross the $100 million mark at the domestic box office.

So you can see why the studio wants to remake it. No word on when filming might begin, but now that they have a director and a lead, it might not be too far away.

Sundance is over, but the deals are still coming. It was a huge year for the films premiering at Sundance.

Amazon paid $13 million and $14 million for Late Night and Brittany Runs a Marathon. They also purchased Shia LaBeouf’s coming-of-age drama Honey Boy for $5 million. Netflix wasn’t quite as busy as Amazon this year, but they did close a deal this week to purchase Extremely Wicked, Shockingly Evil and Vile starring Zac Efron as Ted Bundy.

According to the reports, they acquired the U.S. rights and some international rights to distribute the film for a cool $9 million. They were reportedly battling Lionsgate and STXfilms.

“Extremely Wicked, Shockingly Evil and Vile takes the unique track of telling the Ted Bundy story from the point of view of his longtime girlfriend, Elizabeth Kloepfer, played in the film by Lily Collins. Instead of sensationalizing Bundy’s crimes, the fictional account aims to show how one could feel duped by a loved one, and why reconciling the reported crimes with the man that Liz knew and loved was so difficult.”

No release date has been announced, but sources say Netflix plans to give this movie a prime awards season release date, which means Zac ‘High School Musical’ Efron might be up for an Oscar nomination this time next year. That’s pretty dope.

If you’re a fan of Harmony Korine, then we have some good news for you. The indie filmmaker has returned to the land of features after six long years. His last feature-length film, Spring Breakers, came out to mixed reviews in 2012.

His latest film, The Beach Bum, has some star talent in it. Matthew McConaughey stars in the movie as a rebellious poet living in Miami who does things his own way. Zac Efron, Isla Fisher, Martin Lawrence and Snoop Dogg also star.

“The film has already made headlines for McConaughey’s stories of smoking real weed on set with Snoop Dogg, who would trade out the prop marijuana for the real thing without the actor’s knowledge.”

Classic Snoop. The bizarre movie is set to hit theaters March 22, 2019. Check out the trailer below…

Zac Efron started his career as a Disney kid. He starred in the High School Musical franchise and a lot of people thought his career would end when the franchise died. But it didn’t. In fact, he’s been one of the most successful actors coming out of the franchise.

Just recently he starred in The Greatest Showman and Baywatch, and now he’s getting a bit darker with the upcoming film Extremely Wicked, Shockingly Evil and Vile.

Efron is playing Ted Bundy in the movie, and on Wednesday (Jan. 17th) he shared the photo you see below. It’s the first image of him dressed up as the infamous serial killer…

The director of the project, Joe Berlinger, revealed that filming was set to start on Thursday. CNN provides us with more details:

“The movie will tell the story of Bundy’s horrifying murders from the perspective of his girlfriend Okja, played by Lily Collins. Bundy admitted to killing at least 30 individuals between 1974 and 1978, although the number is thought to be much higher.”

The script, which was written by Michael Werwie, landed on the Black List and earned Michael the Nicholls screenwriting award, so we know everyone is working with great source material.

Hopefully everyone can preserve it and make something truly special.

The musical drama, The Greatest Showman, is just a little over a month away from being released inside a theater near you. Hugh Jackman stars in the film, which is inspired by a true story.

Jackman plays circus tycoon P.T. Barnum, who after losing his job, promises to give his family the life they deserve. It looks like one of those perfect, feel-good movies that come out around Christmas and make you feel all warm and inspired.

In addition to Jackman, you’ll also find Michelle Williams, Zac Efron, Rebecca Ferguson and Zendaya. The film was directed by Michael Gracey, and this will be his directorial debut. You have to start somewhere, right? And this is quite the stage to start on.

The Greatest Showman will hit theaters December 20, and it looks like it will be worth your money, especially if you’re a fan of musicals. Check out the synopsis and trailer below…

“Inspired by the imagination of P.T. Barnum, The Greatest Showman is an original musical that celebrates the birth of show business & tells of a visionary who rose from nothing to create a spectacle that became a worldwide sensation.”

Remember the video above? That was Zac Efron’s life back in 2007. He was the star of the High School Musical franchise, and he was forced to do ridiculous musical numbers like ‘Bet On It,‘ and to his credit he gave them everything he had.

Fast forward 10 years, and Efron has managed to remove the Disney image from his name. He co-starred in Neighbors with Seth Rogen, came back for more in Neighbors 2, got a fun role in Baywatch, and now he might have landed his most important role yet.

The 29-year-old actor will star as Ted Bundy in the upcoming drama/thriller film, Extremely Wicked, Shockingly Evil and Vile. The story will be told from the perspective of Bundy’s longtime girlfriend, Elizabeth Kloepfer.

She didn’t believe the allegations against Bundy when she first heard about them, but then she eventually reported him to the police. For those who don’t remember, Bundy was executed in Florida in 1989 after confessing to the sexual assault and murder of more than 30 women.

“He can play both the depth and the charm that this guy had in equal measures, and which allowed him to manipulate these women in such a terrifying way.”

It’s going to be super exciting to see Efron challenge himself with a serious role. He hasn’t really had the opportunity yet.

Here’s to hoping he nails it.

The Baywatch movie that almost no one wanted will hit theaters in just two weeks, and surprisingly the trailers are doing a great job of getting people excited.

This final red band trailer is filled with some NSFW gross-out humor, which should please you freaks out there.

Dwayne Johnson and Zac Efron will most likely steal the show. They both have great comic timing. But of course, it wouldn’t be Baywatch without the babes. A majority of the audience will buy tickets just to see Alexandra Daddario and Priyanka Chopra in beach attire.

Oh, and this movie does have a plot. Check out the official synopsis and trailer below…

“Baywatch follows devoted lifeguard Mitch Buchannon (Dwayne Johnson) as he butts heads with a brash new recruit (Zac Efron). Together, they uncover a local criminal plot that threatens the future of the Bay.” 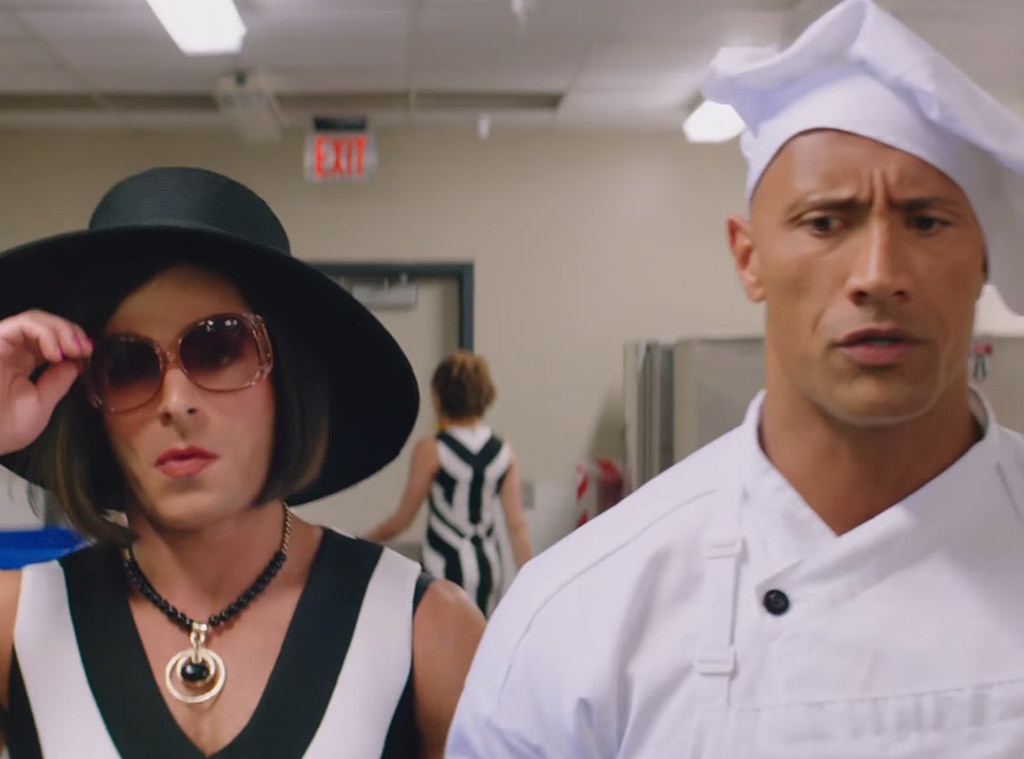 Have you ever wondered what Zac Efron would look like as a 40-year-old housewife from the hills? Well, this new Baywatch trailer was made just for you.

In the new trailer below, Efron finally puts on a shirt to disguise himself as a lady in one of his missions in the upcoming film. It’s actually not a bad look for him.

As we mentioned before, this movie does not look all that bad, mostly because it’s not taking itself too seriously. It’s almost like they know it’s a joke to be remaking Baywatch for the screen. Magical things can happen when people give zero ducks.

Baywatch will hit theaters May 19, 2017, and there will be a lot of familiar faces in it. Efron, Dwayne Johnson, Alexandra Daddario, Charlotte McKinney, Priyanka Chopra, and both Pamela Anderson and David Hasselhoff will make special appearances.

Check out the latest trailer below…

We told you a few days ago that a trailer for the new Baywatch film would be released this week, and now you can see we weren’t lying. The first official trailer was released this morning by Dwayne Johnson.

As we reported earlier this week, the release date for this film was pushed back one week. Instead of being released May 19, 2017, it will hit theaters May 26, 2017. The change was made because the weekend of the 26th is less crowded.

It’s rumored that both Pamela Anderson and David Hasselhoff will make special appearances in this adaption of their 1990s hit TV show.

This trailer focuses on Johnson and Zac Efron, though. Johnson is playing Hasselhoff’s role as Mitch Buchannon, the lead lifeguard. Efron plays a character named Matt Brody, who is hired as a PR stunt to “drum up more interest in the team’s work.”

And as you might expect, Buchannon and Brody don’t exactly see eye to eye, or maybe pec to pec would be more appropriate here.

Anyway, you can check out the official synopsis and trailer below…

“Baywatch follows devoted lifeguard Mitch Buchannon (Johnson) as he butts heads with a brash new recruit (Efron). Together, they uncover a local criminal plot that threatens the future of the Bay.”

Are you one of the 10 people out there excited for this Baywatch film? If so, you’re going to have to wait an extra week to see the movie. The Seth Gordon-directed adaption of the oddly popular 1990s TV show was scheduled to be released May 19, 2017.

But it’s now been pushed back to May 26, Memorial Day weekend. The move is most likely due to the fact that the weekend of the 19th is filled with new releases. Annabelle 2, Alien Covenant, Diary of a Wimpy Kid: The Long Haul, and The Nut Job 2 will all be released that weekend.

In addition to the release date change, we also know the first trailer for the movie will drop this week. No word on how long it might be, but we’re expecting a full trailer because it’ll also be playing inside theaters.