A sci-fi comedy starring a dream team of Seth Rogen, Bill Hader and Zach Galifianakis sounds incredible. It’d be like Denzel Washington, Tom Cruise, and Bruce Willis starring in some action-drama together.

The untitled project (known as The Something) was scheduled for a release date of May 26, 2017. Universal announced the news earlier this year and revealed the film would be the directorial debut of ‘22 Jump Street‘ writer Rodney Rothman. According to Variety, the story was going to center on “astronauts who happen upon a mysterious craft and find that they are not equipped to represent humankind in a battle of intelligent life.”

Sounds promising, right? Watching Rogen, Hader and Galifianakis try to communicate with a group of aliens sounds like it would be hilarious. But unfortunately, it doesn’t look like the movie will be hitting theaters next year. Heck, there is a chance production will never start.

Universal has pulled the May release date. They did not provide any details, but sources claim the studio is concerned with the budget, especially after most of their live-action comedy films failed in 2016.

Earlier this month, Rogen told Howard Stern that “scheduling issues” were holding the movie back, but that doesn’t seem likely. Rogen and Galifianakis have pretty clear schedules at the moment, and if everyone was 100% on board, we have to imagine they would be getting ready to hit the production stage right about now.

The good news is that the project hasn’t been canceled. For now, it’s just being delayed. Hopefully they can work everything out, because the world needs more Bill Hader.

It’s hard not to get excited when you hear that Zach Galifianakis, Seth Rogen and Bill Hader will be starring in the same movie together. I imagine it’s the same feeling Miami Heat fans had when their team contained Chris Bosh, Dwyane Wade and LeBron James.

Universal Pictures announced that the sci-fi comedy ‘The Something‘ will happen, and those brilliant comedy actors listed above will be starring. The writer of 22 Jump Street, Rodney Rothman, wrote the movie and he will also be making his directorial debut with the film.

According to the report from Deadline, The Something will center “on a group of astronauts in space who come upon another ship — the crews hate each other but have to work together.”

That’s pretty much all the information we know about the actual story, but I mean…do we even care at this point? Let’s just celebrate the fact that Seth, Zach and Bill will be working together. It’s hard to see how this movie won’t be a huge success at the box office. The logline for this film could be, “Three dudes share a jar of mayonnaise together while watching episodes of Family Feud, but what happens when all the mayo disappears?” And people would still watch it because of the star power.

No release date has been announced yet. We’ll keep you posted. 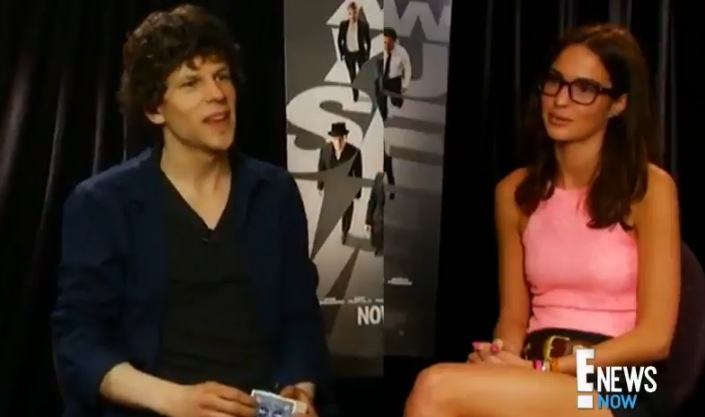 YouTube isn’t just full of cats and unnecessary jump cuts. You can find pretty much anything on the site, including the awkward interviews you see below. This list could have easily been 50 videos long, but I didn’t want to hit you with everything at once.

Did you know you can die from too much awesomeness? Seriously. It’s happened before. You have to ease into sh-t like this.

Watch the six videos below, and then please step away from your computer. Take a walk, drink some water, and finish things off with a nap.

No. 6 – Bruce Willis Has Been Doing This For Too Long

Bruce is known for acting like a dick during interviews. This is probably one of his worst. I also remember a radio interview he did that was horribly awkward. Apparently, someone from the radio station was taking photos of him (for their website) during the interview, and Mr. Willis didn’t appreciate it. He stopped the interview and berated the poor lady.

The woman, “Psycho” Shanon, was actually diagnosed with a non-malignant brain tumor a few years ago, and can you guess what she named her tumor? Bruce Willis.

Have you watched Between Two Ferns with Zach Galifianakis? Sure you have. It’s hilarious, and in this interview, Zach meets radio host Gordon Keith, who started doing awkward interviews before it was the cool thing to do.

The interview he did with Kristen Bell and Dax Shepard is one of my favorites. Check it out by clicking this link.

No. 4 – Jesse Eisenberg Tries To Flirt?

I’m still not sure about this interview. Was he flirting with the extremely beautiful reporter? Was he simply being an asshole? Was it all an act? I think the most likely answer is that he was trying to flirt with her.

In an interview a month after the video you see above went viral, Jesse explained that he had no idea the video went viral until somebody called and told him.

“I wasn’t, until somebody called me and told me. But people write mean things about people on the internet even if they’re not in movies… I just don’t ever read stuff about myself, otherwise you’ll never leave the house.”

You could insert Bill Hader’s laugh into anything, and it would automatically make that thing funny. Funerals, that sad scene in Air Bud, nursing homes, etc.

Bill’s laugh is the best medicine.

We all remember this, right? You can’t forget it. David Letterman had several awkward moments as the host of The Late Show, but this one might be the most memorable. Of course, Letterman handled it like a pro. Late night television won’t be the same without him.