Woody Harrelson is set to bring some carnage to the upcoming Marvel flick, Venom: Let There Be Carnage.

In the flick, Tom Hardy returns to the role of Eddie Brock/Venom.

In the movie’s new trailer, which was released on Monday, Eddie has gotten tired of hunting down criminals for his alter ego/partner to devour, so he’s back to being a loser as far as Venom is concerned. Of course, both sides of this rocky relationship are still played by Tom Hardy, who is somehow weirder as a human than as a symbiote.

This new trailer gives us a better look at the movie’s villain, Cletus Kasady/Carnage, played beautifully by Harrelson.

Cletus is in maximum security prison for his crimes as a serial killer, but when Eddie comes to profile him, Cletus takes a bite out of Venom’s host and winds up with just enough symbiote DNA to create a whole new and more dangerous version: Carnage.

I’ll be honest, none of that sh*t makes any sense to me, but this movie isn’t for me. I’m fine with that.

The first ‘Venom’ flick was released back in 2018 and received mostly negative reviews from critics, but that didn’t stop it from crushing the box office. It made over $850 million worldwide against a $100 million budget.

We all love Woody Harrelson, right? It’s difficult to not like him. He truly seems like a sweet guy.

The 59-year-old Texan’s next role will be in the feature film adaptation of Joseph Kessel’s novel, ‘The Man With the Miraculous Hands: The Fantastic Story of Felix Kersten, Himmler’s Private Doctor’

Obviously it’ll be shortened to just ‘The Man With the Miraculous Hands’ for this film adaptation.

The World War II psychological thriller will star Harrelson (“Three Billboards Outside Ebbing, Missouri,” “The People vs. Larry Flynt”) in the lead role as Felix Kersten, a Finnish-born medical professional who was reluctantly pulled into the Third Reich’s corridors of power as Heinrich Himmler’s personal physician and prisoner. Oren Moverman has signed on to write and direct.

Moverman was nominated for an Oscar for writing the 2009 film, The Messenger, so this project is clearly in good hands. (no pun intended)

That movie also starred Harrelson, so they obviously enjoy working together.

The film will be produced by Eric Jehelmann, who had a lot to say about Woody and Oren. He described them as “two jewels of American cinema,” which is a pretty nice thing to say.

No word on a release date, but we’ll keep you posted.

Filmmaker Roland Emmerich, mostly known for his disaster films, is coming at us again, this time from World War II.

‘Midway‘ follows the story of US Navy sailors and aviators “who persevered through the Battle of Midway, a turning point in the Pacific Theater of World War II.”

It’s a pretty stacked cast. Lots of talented actors in this movie. It looks pretty insane, and given the $100 million budget, it better be insane.

Midway will hit theaters November 8, 2019, which is Veteran’s Day weekend. 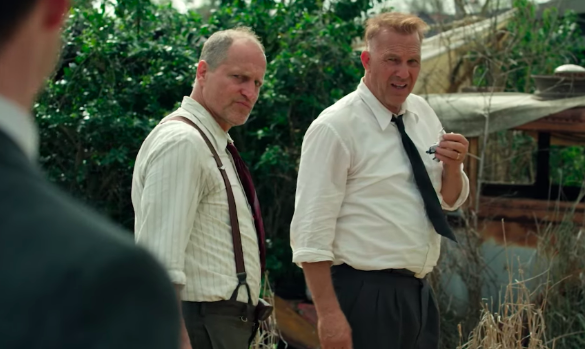 The two stars are working together in the upcoming Netflix film, The Highwaymen. The period crime drama tells the story of two Texas Rangers trying to track the infamous bank-robbing couple, Bonnie and Clyde.

Check out the official synopsis from Netflix below…

“‘The Highwaymen’ follows the untold true story of the legendary detectives who brought down Bonnie and Clyde. When the full force of the FBI and the latest forensic technology aren’t enough to capture the nation’s most notorious criminals, two former Texas Rangers (Costner and Harrelson) must rely on their gut instincts and old school skills to get the job done.”

The film is expected to have its world premiere at the South by Southwest Film Festival on March 10. It will then be released on Netflix across the globe on March 29, 2019.

Watch the trailer below… 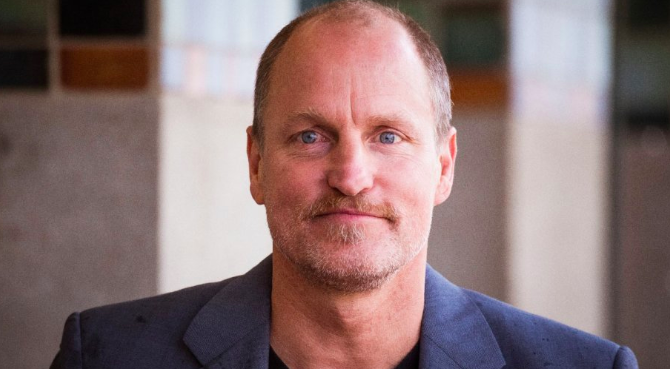 Woody Harrelson, one of the most beloved actors out there, is set to star in an upcoming dramedy titled Fruit Loops.

The movie, which was written and directed by Ted Melfi, centers on a group of mental patients “who band together when their hospital suddenly sells.” Harrelson will play a character named Colonel Leonard F. Cubby, who suffers from PTSD from his tours in Vietnam.

Harrelson is currently in Atlanta filming the sequel to Zombieland. It looks like this dramedy will be his next film.

Not much else is known about ‘Fruit Loops,’ but we will keep you posted. Sounds like it definitely has some potential. Melfi is certainly a talented filmmaker. He wrote and directed ‘Hidden Figures‘ and the Bill Murray indie flick ‘St. Vincent.‘

We thought this day would never come, but it’s here, and we can’t stop smiling. Sony Pictures has confirmed that a ‘Zombieland 2′ is happening and all of the original cast members will be returning.

Emma Stone, Woody Harrelson, Jesse Eisenberg and Abigail Breslin are set to star in this sequel, which will be released in October of 2019, 10 years after the original film was released in 2009.

Not only will the original cast be returning, but director Ruben Fleischer will also return to direct. And of course writers Paul Wernick and Rhett Reese will be involved.

Filming will start in January 2019, so there is not a lot of time to back out now. We’ve had plenty of false starts before, but this looks like the real deal.

“In Zombieland 2, through comic mayhem that stretches from the White House and through the heartland, the Zombie slayers must face off against many new kinds of zombies that have evolved since the first movie, as well as some new human survivors. But most of all, they have to face the growing pains of their own snarky, makeshift family.”

The first film surprised everyone by making over $100 million worldwide. We have to imagine this sequel will bring home more than that. The audience has only grown throughout the years.

Just knowing this movie stars both Brie Larson and Woody Harrelson should be enough to make you want to watch it, but just in case it’s not, let’s tell you a little more about The Glass Castle.

It’s based on the memoir by Jeannette Walls, and the film follows Larson as she steps into Walls’ shoes “tracing her extraordinary life from poverty-stricken childhood to successful New York-based journalist.”

And during this journey, we meet Walls’ dysfunctional family, who were constantly moving from city to city thanks to her father’s troubles with landing a steady job.

“They did a spectacular job bringing to life a complicated story, there’s so many nuances. I wanted Brie Larson to play this role even before I knew who she was. She understands how to be strong and vulnerable at the same time, how you can fight and be scared at the same time.”

The film will be released by Lionsgate on August 11, 2017. You will not want to miss this one. Check out the trailer below…

I’ll be honest, I didn’t know about this movie before this week, which is a bit surprising ’cause usually I know every Woody Harrelson film in production.

After three months pass with no arrests, she takes out three billboards just outside of town that call out the chief of police, played by Woody.

I know it’s only March, but this has a chance to be one of the best trailers of the year. I mean, this is why trailers exist. I knew nothing about this movie a few days ago, and now I can’t f**king wait for it to come out.

In addition to Woody and McDormand, you also have Sam Rockwell, Peter Dinklage and Abbie Cornish. It doesn’t look like an official release date has been announced, but it’s expected to come out later this year.

Check out the synopsis and trailer below…

“A darkly comic drama from Academy Award winner Martin McDonagh (IN BRUGES). After months have passed without a culprit in her daughter’s murder case, Mildred Hayes (Academy Award winner Frances McDormand) makes a bold move, painting three signs leading into her town with a controversial message directed at William Willoughby (Academy Award nominee Woody Harrelson), the town’s revered chief of police. When his second-in-command Officer Dixon (Sam Rockwell), an immature mother’s boy with a penchant for violence, gets involved, the battle between Mildred and Ebbing’s law enforcement is only exacerbated.”

Fans of the 2009 film Zombieland are probably celebrating right now. After being teased with rumors of a sequel for years, it looks like they will finally get the release they’ve been looking for.

Earlier this year, it was announced that the original writers of Zombieland (Paul Wernick and Rhett Reese) would be joining the sequel as executive producers. In Hollywood, that usually means they won’t be involved much at all. It’s just a way to trick fans into thinking the original team will return.

But surprisingly, that doesn’t appear to be the case with Zombieland 2. Wernick and Reese are taking a hands-on approach with this project. During an appearance on AMC’s Geeking Out with Kevin Smith and Greg Grunberg, the original writers revealed they are currently working on the sequel.

In fact, they are having a meeting with Woody Harrelson to discuss the story…

“That is breaking news that we’re on Zombieland 2 right now. We’re sitting with Woody [Harrelson] tomorrow and are going to sort of walk him through some of the stuff we want to do. All the cast is pretty excited.”

You see that? All the cast is pretty excited. People were worried that Emma Stone and Jesse Eisenberg might be ~too big~ for the sequel now, but it looks like they are ready to reprise their roles.

No word on when they are planning to film this sequel, but we’re assuming they’re shooting for 2017. They can’t afford to wait too much longer. It’s already been seven years. 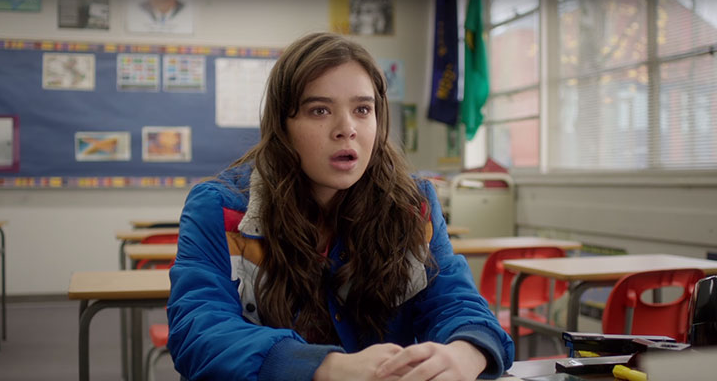 And now this month we have another coming-of-age trailer to show you. The Edge of Seventeen is promised to be “an honest, candid, often hilarious look at what it’s like to grow up as a young woman in today’s modern world.”

This character-driven film is the feature directorial debut of Kelly Fremon. She also wrote the script, and managed to get Academy Award winner James L. Brooks to jump on as a producer. The legendary filmmaker is responsible for several great films: Broadcast News, Jerry Maguire (producer), and Terms of Endearment. It’s hard not to get excited when you hear his name attached to a movie.

Hailee Steinfeld stars as high school junior Nadine, an awkward teenager who basically has Captain America for an older bother. The trailer shows us how her life gets even more complicated when her best friend starts dating her brother. The best parts of the trailer are the scenes between Nadine and her history teacher played by Woody Harrelson.

The Edge of Seventeen will hit theaters September 30. Check out the synopsis and trailer below…

“Nadine (Hailee Steinfeld) and Krista (Hayley Lu Richardson) are inseparable best friends who are both in high school. That changes when Nadine discovers Krista has secretly been dating Nadine’s older brother (Blake Jenner), a popular and handsome soccer player whom Nadine despises. They soon discover there’s a fine line between best friends and worst enemies.”