Some people might watch this video and think, “Wow. That was incredibly awkward,” but I think it’s incredibly entertaining. ‘Last Week Tonight‘ host John Oliver was moderating a 20th anniversary screening panel for Wag the Dog on behalf of the Tribeca Institute. The panel included Dustin Hoffman, producer Jane Rosenthal and director Barry Levinson.

For those who don’t know, Wag the Dog, was a “political spoof in which campaign advisers fabricate a war to cover up a presidential sex scandal,” so Oliver figured it would be appropriate to talk about the sexual harassment allegations against Hoffman.

Oliver said the allegations made by writer Anna Graham Hunter were “hanging in the air.” Hunter claims that Hoffman groped her and made inappropriate remarks to her when she was a teenage intern on a movie set in the 1980s. Another woman named Wendy Riss Gatsiounis told Variety that the 80-year-old actor propositioned her during a meeting in 1991.

After Hunter’s claims went public, Hoffman sent out a statement saying, “I have the utmost respect for women and feel terrible that anything I might have done could have put her in an uncomfortable situation. I am sorry. It is not reflective of who I am.”

But when Oliver brought up the accusations during the panel, Hoffman claimed he didn’t even remember the woman, “I still don’t know who this woman is. I never met her; if I met her it was in concert with other people.”

And that’s when Oliver really went in. He pointed out weak the original apology was…

“‘It’s not reflective of who I am’ — it’s that kind of response to this stuff that pisses me off. It is reflective of who you were. If you’ve given no evidence to show it didn’t [happen] then there was a period of time for a while when you were a creeper around women. It feels like a cop-out to say ‘it wasn’t me.’ Do you understand how that feels like a dismissal?”

This led to a long argument between Hoffman and Oliver. Some people in the crowd cheered for Oliver, while others yelled at him to “let it go.”

The best line came when Hoffman told Oliver to have an open mind, stating, “You weren’t there [on set,]” to which Oliver replied, “I’m glad [I wasn’t].”

Most Blockbusters across the country have closed. My local Blockbuster is now a taco joint, and before that, it was a Spirit Halloween store. It’s been several years since I smelled the inside of a Blockbuster. Those who have been in one before know the smell I’m talking about. It’s freshly cleaned carpet, mixed with bagged popcorn and a touch of Junior Mints.

According to Vice, there are only 10 Blockbuster Video stores remaining. Six of those stores are in Alaska. One of the reasons Blockbuster is still a success in Alaska is because of the “dark, long winters and sparse layout,” and you have to remember Wi-Fi is more expensive out there than in other states.

One of the more popular Blockbuster stores in Alaska has become a tourist attraction. When people visit Alaska, they’re not only stopping to see the incredible scenery and wildlife, they’re also visiting this store to take photos and maybe rent a movie or two.

Check out the video below…

Well, this escalated quickly. It started off with a shaky source, talking about how Jamie Foxx was taking punches inside a gym, and now it has transformed into a sure thing.

Mike Tyson recently confirmed that Jamie Foxx will play him in an upcoming biopic, which might be directed by Martin Scorsese. No release date has been announced. Heck, we don’t even know when filming might begin, but we do know this movie is going to be certified fresh.

Back in May of 2015, when Foxx was first linked to the Mike Tyson biopic rumors, Foxx brilliantly described the opening scene of the movie. We don’t know if this is still the plan, but if there is a God in heaven…

Back in November of last year, Wired uploaded one of their most interesting videos. They had dialect coach Erik Singer critique the accents of some of Hollywood’s biggest names. He looked at Will Smith’s accent in Concussion, Philip Seymour Hoffman in Capote, and several other actors.

If you still haven’t watched the video, you can check it out at the top of this page. It’s incredibly fascinating, which is why we are so glad they brought Erik back to break down more accents/impressions.

Watch the video below…

As mentioned in the title, Robert De Niro is a legend. If you want to start some beef with De Niro, you better make sure you have the bigger fork in the battle.

For two minutes, the 73-year-old actor read mean tweets and then responded to them in the only way he knows how.

We’re not going to ruin all the jokes for you, but we will say there was one tweet in the video below that made De Niro reply with, “You know what you could do. You can suck my c–k. You f–king scumbag. Happy?”

It’s good stuff. Watch it below…

I could get behind this version of mean tweets. Instead of having several celebs read mean tweets, focus on just one and allow them to respond to each tweet.

After all, the best mean tweets come when the celebs have dramatic reactions to them. Or when they laugh their a** off.

Christmas is coming early for all you Netflix users out there. The streaming service announced on Wednesday that users all over the world can download some of their favorite movies & TV shows to their mobile devices for offline viewing.

This means you won’t have to use up all that delicious data when you’re traveling without Wi-Fi. Before your trip, you can now download the movies and shows you want to watch, and then enjoy them offline while you’re on that long flight or car ride.

The good news is that there is a lot of great content already available for offline playback. The Office, Parks & Rec, Orange Is the New Black, Narcos, 30 Rock, Minions, Dazed and Confused, Boyhood, and many more.

It’s a great move by Netflix. People have been wanting this for a long time, and it didn’t look like they were going to get it. Netflix previously stated they had no plans to offer a feature like this.

Also, you’ll have two options for downloading. You have the “standard” quality and “higher” quality. Neither option will match the quality you get on your TV or computer, but you’re not allowed to complain when you’re flying in a freaking plane while watching The Office. Just enjoy that. It’s amazing.

One of the most watched videos on YouTube is the Evolution of Dance video. The video is over 10 years old now, and there have been several people trying to recreate the magic with their own versions.

But it’s time to forget about the art of dance for a minute. We’re here to talk about about the stunts. A new video from All 4 features top Hollywood stuntman Damien Walters recreating some of the most classic movie stunts using a large treadmill and a little help from his friends.

You have some direct references to Indiana Jones and The Matrix in here. This video is pretty impressive, showing the evolution of stunts in film over the years in an entertaining/informative way.

It’s also a great cover letter for Walters. Not that he needs one, but he can just direct people to this video and land any job he wants.

It won’t be nearly as popular as the evolution of dance video, but it’s just as important. We only wish it went on a little longer. 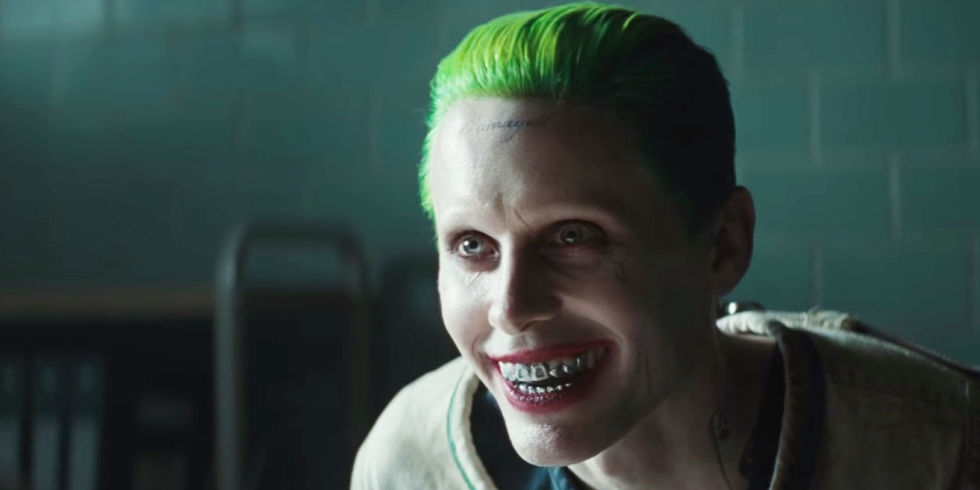 Even if you’re not a huge fan of comic book movies, you’ll probably remember the controversy surrounding Jared Leto’s performance as the Joker in Suicide Squad. His performance was hyped for months, and his cast members told stories about how crazy he was on set, “He IS the Joker” they would say.

But then when the film was released, his character was barely in the movie. Most of his scenes were cut. It’s believed the studio wanted to stay away from showing the abusive side of the relationship between the Joker and Harley Quinn.

This obviously upset a lot of fans (and Leto himself) but most of them believed they would at least see the deleted scenes in the extended cut version of the movie. Sadly, that wasn’t the case either. The Joker was still missing.

Now, thanks to the internet, we are finally able to watch all of the deleted scenes involving the Joker. This shows the more violent side of the character, which is something that fans missed in the version of the film that was released in theaters.

This version of the Joker wouldn’t have saved the movie, but it would have at least made it more entertaining.

It’s time to get excited. The first trailer for Rogue One: A Star Wars Story was released Thursday morning on ABC’s Good Morning America. It’s something fans have been waiting for ever since they heard filming had started last summer.

And while this trailer is pretty awesome, it’s mainly focused on setting things up and introducing everyone to Felicity Jones’ character Jyn Erso. She’s a little bit of an anti-hero, and those seem to be super hot right now, so this trailer should please most fans.

The film was directed by Gareth Edwards (Godzilla) and it features an impressive cast. In addition to Jones, you have Alan Tudyk, Forest Whitaker, Mads Mikkelsen and Ben Mendelsohn. Rogue One tells the story of a band of rebels and their attempt to steal plans for the Death Star.

During Star Wars Celebration last year, Edwards talked a little about his inspiration for this movie and how he was looking forward to creating “a grittier take on the franchise, citing Saving Private Ryan as one of several inspirations.”

Check out the trailer below. Rogue One: A Star Wars Story will hit theaters December 16, 2016.

Are you tired of the drama surrounding Batman v Superman: Dawn of Justice? Tired of hardcore fans threatening to harm critics for putting out bad reviews? Are you also tired of reading articles that sound more like commercials you might see while watching Last Call with Carson Daly?

Well, we can help you with at least two of those problems. The first trailer for The LEGO Batman Movie was released this week, and it’s making us forget about the allegedly joyless Dawn of Justice film.

After the incredible success of The LEGO Movie in 2014, Warner Bros. is hoping this spin-off is just as successful at the box office. Chris McKay is the director behind this project. Will Arnett returns as Batman, Michael Cera will provide the voice of Robin, Zach Galifianakis plays the Joker, and Mariah Carey will voice Gotham’s mayor.

Sadly, this trailer is being released super early. The film won’t hit theaters until February 10, 2017, which means we still have 11 months to wait. The sequel to the original LEGO Movie is scheduled to hit theaters May 18, 2018.

Check out the trailer below. It looks like a lot of fun.