Are you ready to mouth, “What the fu…” at your computer screen while watching a bloody and bizarre horror trailer? Well, you’ve come to the right place.

The red band trailer for ‘Ready or Not‘ has been released, and it’s pretty wild.

In the movie, a wealthy family welcomes their future daughter-in-law into the family by participating in their strange tradition of hunting the bride-to-be down with crossbows and other torture devices.

Before you can join their family, you have to survive their sadistic game of hide-and-seek. Andie MacDowell, Samara Weaving, and Adam Brody star in the movie. Apparently Brody is making a comeback after his surprise appearance in Shazam!

I must admit, this trailer looks pretty fun. I kinda want to watch this movie. Ready or Not will hit theaters August 23, 2019.

Boots Riley’s surrealist sci-fi/comedy ‘Sorry to Bother You’ promises to be one of the strangest experiences you’ll have at the theater this year. Riley is making his feature writing/directing debut with this film, which stars Atlanta’s Lakeith Stanfield, Tessa Thompson, Steven Yeun, Armie Hammer and Patton Oswalt.

It’s hard to ask for a better cast than that, especially for a feature debut in directing.

It might not be the best film of the year, but it’s definitely going to be the most original, and that’s something that should be celebrated. Hollywood needs more creative/original artists, so please go support this movie when it’s released on July 13.

“In an alternate present-day version of Oakland, telemarketer Cassius Green discovers a magical key to professional success, propelling him into a macabre universe.”

‘The Death of Stalin‘ has been receiving great reviews in the U.K., it’s also been banned in Russia. The controversial film stars Steve Buscemi, Jason Isaacs, and Jeffrey Tambor.

“‘The Death of Stalin’ depicts Soviet dictator Joseph Stalin’s final days and the chaos that ensues following his death. The recently released trailer features scenes with Nikita Khrushchev, played by Steve Buscemi, discussing funeral arrangements and Stalin’s committee figuring out how to run the country.”

According to a Russian culture ministry spokeswoman, the film was pulled out of Russia for containing “information whose distribution is legally banned in Russia,” whatever that means.

The movie, which is directed and co-written by the creator of Veep, is set to hit theaters in the U.S. on March 9, 2018. Check out the red band trailer below…

Guillermo del Toro’s latest film, The Shape of Water, has a chance to be one of the best films of 2017. It’s already receiving great reviews from critics around the world, and it won the Best Picture award at the Venice Film Festival.

There is a lot happening in this red band trailer, but don’t worry about spoilers. It’s constructed in a way that leaves you feeling more confused than anything else. It’s hard to put the pieces together, unless you really study this trailer.

As mentioned in the title, Sally Hawkins and Octavia Spencer star in this fantasy/drama/love story. It’s set to hit theaters December 8, 2017, and you’ll probably want to watch it ’cause it’s most likely going to be nominated for some awards. You don’t want to be that person at the Oscar party who hasn’t watched any of the films nominated.

“From master story teller, Guillermo del Toro, comes THE SHAPE OF WATER – an other-worldly fairy tale, set against the backdrop of Cold War era America circa 1962. In the hidden high-security government laboratory where she works, lonely Elisa (Sally Hawkins) is trapped in a life of isolation. Elisa’s life is changed forever when she and co-worker Zelda (Octavia Spencer) discover a secret classified experiment.”

The Baywatch movie that almost no one wanted will hit theaters in just two weeks, and surprisingly the trailers are doing a great job of getting people excited.

This final red band trailer is filled with some NSFW gross-out humor, which should please you freaks out there.

Dwayne Johnson and Zac Efron will most likely steal the show. They both have great comic timing. But of course, it wouldn’t be Baywatch without the babes. A majority of the audience will buy tickets just to see Alexandra Daddario and Priyanka Chopra in beach attire.

Oh, and this movie does have a plot. Check out the official synopsis and trailer below…

“Baywatch follows devoted lifeguard Mitch Buchannon (Dwayne Johnson) as he butts heads with a brash new recruit (Zac Efron). Together, they uncover a local criminal plot that threatens the future of the Bay.”

Ryan Reynolds and Samuel L. Jackson in a buddy comedy? Sure. Take our money now. Just when the buddy comedy genre was going to take its last breath, Jackson and Reynolds have come to save the day.

Lionsgate’s Summit Entertainment has released the red band trailer for The Hitman’s Bodyguard. The film, which is scheduled for an August 18, 2017 release date features a lot of classic Samuel L. Jackson. He’s got one dirty mouth in this film.

Jackson plays the world’s most notorious hitmen in the movie, and Reynolds is the world’s top protection agent. He’s forced to protect Jackson’s character, which is a great struggle because they are enemies.

“The world’s top protection agent (Ryan Reynolds) is called upon to guard the life of his mortal enemy, one of the world’s most notorious hitmen (Samuel L. Jackson). The relentless bodyguard and manipulative assassin have been on the opposite end of the bullet for years and are thrown together for a wildly outrageous 24 hours. During their raucous and hilarious adventure from England to the Hague, they encounter high-speed car chases, outlandish boat escapades and a merciless Eastern European dictator (Gary Oldman) who is out for blood. Salma Hayek joins the mayhem as Jackson’s equally notorious wife.”

Forgetting Sarah Marshall came out almost 10 years ago, but it’s still one of my favorite comedy films. Not only did it have a lot of laughs, but it also had a lot of heart, which is something you want when watching a romantic-comedy.

But why am I talking about Forgetting Sarah Marshall right now? Because both Kristen Bell and Mila Kunis starred in the film, and they’re teaming up again for the upcoming comedy film titled Bad Moms. Kunis has the lead role in the movie and plays an overworked (and exhausted) mother who has finally reached her breaking point.

After calling out the “perfect mothers” at her child’s school function, she joins forces with two other equally stressed mothers (Bell and Kathryn Hahn) and they all work together to make life hell for the “perfect mom” leader played by Christina Applegate.

The red band trailer for the movie was just released online and it’s absolutely hilarious. I know we say that a lot on this site, but would it help if I said I really mean it this time? The final 30 seconds are probably the most hilarious, so make sure you watch the whole thing.

Scheduled for a February 12, 2016 release date, Tim Miller’s Deadpool is one of the most anticipated films of 2016. Just how popular will this movie be? Well, it had one of the loudest panels at the 2015 San Diego Comic-Con. The first teaser trailer for the film delighted over 6000 fans, and now the rest of the world is getting their first look at the movie.

The hilarious red band trailer you see below features Marvel Comics’ most unusual anti-hero, Deadpool, played by Ryan Reynolds. The talented writers behind Zombieland, Rhett Reese and Paul Wernick, wrote the screenplay for this movie, so you know there is a 99.9% chance it will be great.

As mentioned above, Deadpool will hit theaters in early 2016. You can check out the official plot synopsis and trailer below…

“Based upon Marvel Comics’ most unconventional anti-hero, DEADPOOL tells the origin story of former Special Forces operative turned mercenary Wade Wilson, who after being subjected to a rogue experiment that leaves him with accelerated healing powers, adopts the alter ego Deadpool. Armed with his new abilities and a dark, twisted sense of humor, Deadpool hunts down the man who nearly destroyed his life.” 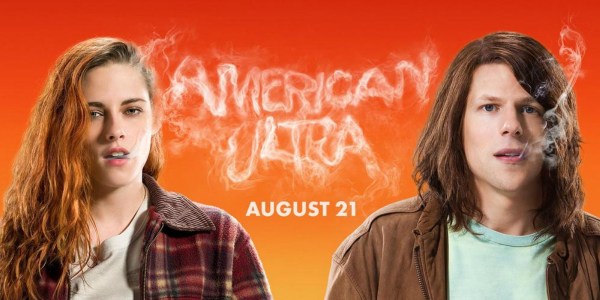 Yesterday we showed you the intriguing trailer for Jesse Eisenberg’s new movie with Jason Segel, The End of the Tour. And now we have another Jesse-filled movie trailer to share with you all.

American Ultra stars Eisenberg and Kristen Stewart. It’s being described as an action/comedy/thriller/stoner’s wet dream. It’s also being compared to Pineapple Express, which should be all the motivation you need to watch the trailer. It also reminds me of the underrated TV show, Chuck.

Nima Nourizadeh directed the film, and Max Landis (Chronicle, Wrestling Isn’t Wrestling) created the script. Landis is an interesting character. If you watch some of his interviews, and even his random videos on YouTube, you can tell he really wants to write original stories. If you’re interested in learning more, check out the interview he did on the Explain Things to Me podcast.

I am excited about this film for several reasons. The reunion of Stewart and Eisenberg, the Chuck-like feel to the trailer, and the fact that Topher Grace is in the movie. I feel like most people don’t appreciate his comedy skills. He has great comedic timing.

Check out the official plot synopsis and trailer below. The film hits theaters August 21.

“A stoner and his girlfriend’s sleepy, small-town existence is disrupted when his past comes back to haunt him in the form of a government operation set to wipe him out.”

We have a special treat for you all this Friday. The red band trailer for the Vacation reboot has been released, and it’s actually not that bad.

One thing you’ll notice right away are the references to the original film. The trailer even begins with footage from the original 1983 comedy. And then we jump straight into raunchy town, which makes sense considering this is the red band trailer.

Like always, we’re not going to ruin the trailer by telling you everything that happens inside of it. Just watch it for yourself and be surprised.

We will tell you that this film is filled with some pretty big names in the comedy game. You have Ed Helms, Christina Applegate, Leslie Mann, Charlie Day, Nick Kroll and Keegan-Michael Key. With a cast like that, you have to expect a lot of laughs.

And the fact that the studio decided to release this film in the middle of summer proves they are confident in this project. You can catch Vacation in theaters July 29, 2015.

Watch the trailer below…

We might have also found the Official Movie Poster!