Will Ferrell is known for starring in some extremely silly movies. Sometimes they work (Elf, Anchorman, Step Brothers) and sometimes they don’t (Holmes & Watson, Daddy’s Home)

Where will his latest film, Eurovision Song Contest: The Story of Fire Saga, fall on the list? It’s still too early to tell, but if we’re going off the trailer alone, it’s not looking so hot.

The comedy film was originally supposed to be released back in May to coincide with the real-life Eurovision Song Contest, but due to the pandemic, it was pushed back.

Eurovision Song Contest features Will Ferrell and Rachel McAdams as Icelandic singing duo Lars Erickssong and Sigrit Ericksdottir, aka Fire Saga as they are given the chance to represent their country at the Eurovision Song Contest. However, nobody, including Lars’ father (Pierce Brosnan), think they are any good. In fact, everybody seems to hate everything they do.

As mentioned above, this trailer is not doing anything for me. Maybe I’m not the target audience though.

Check it out below…

We know the world is focused on Black Panther right now, and rightfully so, but if you need a little break from the land of comic books, maybe you should check out Game Night.

The comedy film, which stars Jason Bateman, Rachel McAdams and Kyle Chandler, is set to be released this weekend and it’s getting great reviews from critics. If you saw a trailer for the film a few weeks back and thought, “Oh. It looks like your typical blockbuster comedy,” you might want to think again.

Game Night had an early screening for critics last night in Hollywood, and the reviews coming out are extremely positive. It’s currently sitting at a solid 88% rating on Rotten Tomatoes, and critics are saying if you watch this at a packed theater, you will not be disappointed because the laughter will be infectious.

Lindsey Bahr from the Associated Press wrote this in her review…

“A charismatic ensemble cast, a sharp script and a few well-placed twists make ‘Game Night’ one of the more enjoyable big studio comedies in recent memory. Attempting to explain why a comedy works is a kind of futile exercise, but this group of actors just works together. They have an easy chemistry with one another that resembles that sort of lived-in friendship that usually only comes across midway through the first season of a sitcom.”

And Sean O’Connell from CinemaBlend writes…

“Game Night doesn’t reinvent the comedy wheel, or push the envelope so far that it changes what’s allowed in a mainstream crowd-pleaser. Instead, it throws darts at the board with unflinching consistency and lands maybe 75 percent of its punchlines. At times, it cooks up shockingly funny and gross bits (the one with the bloody dog that’s shown in the trailer still gets huge laughs, even when you know it’s coming.)”

Basically, if you want to have a good time and laugh your a** off, then this movie will certainly do the trick. If you want to see the next Academy Award winner, well, you might want to wait until November. ‘Disobedience‘ is the English-language film debut for director Sebastian Lelio. It features Rachel McAdams and Rachel Weisz deeply in love, but unable to fully explore it because of their strict religion. It’s based on the 2006 novel of the same name by Naomi Alderman.

The film premiered last year at the Toronto International Film Festival, and it received mostly positive reviews. It currently has a 93% rating on Rotten Tomatoes. After its premiere at the festival, it was picked up for release in the United States, which is why we’re now seeing promotion for the film.

It’s expected to be released April 27, 2018, and it could surprise a few people.

“The film follows a woman as she returns to the community that shunned her decades earlier for an attraction to a childhood friend. Once back, their passions reignite as they explore the boundaries of faith and sexuality.”

Game Night doesn’t appear to be your typical blockbuster comedy. The film, which is attached to Warner Bros., stars Jason Bateman and Rachel McAdams as a couple whose weekly game night gets spiced the f**k up when Bateman’s brother arranges a murder mystery that quickly gets out of hand.

It’s a mix between comedy/thriller/murder mystery, and we could not be more excited. The writer of the film, Mark Perez, was one of the writers of the 2006 comedy, Accepted. And while that might not mean much to most of you, Accepted is a guilty pleasure of mine. I think it deserves more credit than it gets.

In addition to Bateman and McAdams, Game Night will also star Sharon Horgan, Billy Magnussen, Kyle Chandler and Larmorne Morris. It’s scheduled to hit theaters March 2, 2018, and I think it’ll be worth your money.

Watch the trailer below and decide for yourself…

The second I heard that yet another dramatic boxing movie had been made, I immediately thought “great, another attempt to copy Rocky.” I was expecting it to be filled with clichés, featuring an underdog who has to choose between the love of the sport and his own health, while a disapproving wife looks on. While that movie definitely had that, it also had some unique angles that made it a bit better than I expected it would be.

Billy Hope (Jake Gyllenhaal), a man who grew up in an orphanage in Hell’s Kitchen, is a light-heavyweight champion in the ring with a unique fighting style that I’ve never quite seen in a sports movie. He has a unique ability to absorb pain, and uses this to allow his opponent to beat him until he’s filled with rage, at which point, he just starts kicking butt. Maureen (Rachel McAdams) is his lifelong love, with another unique twist. She grew up in the same orphanage, so she gets him and his need to be strong. When his manager Jordan Mains (50 Cent) brings in a contract for a three-fight deal, she opposes it, thinking his body has undergone enough punishment. 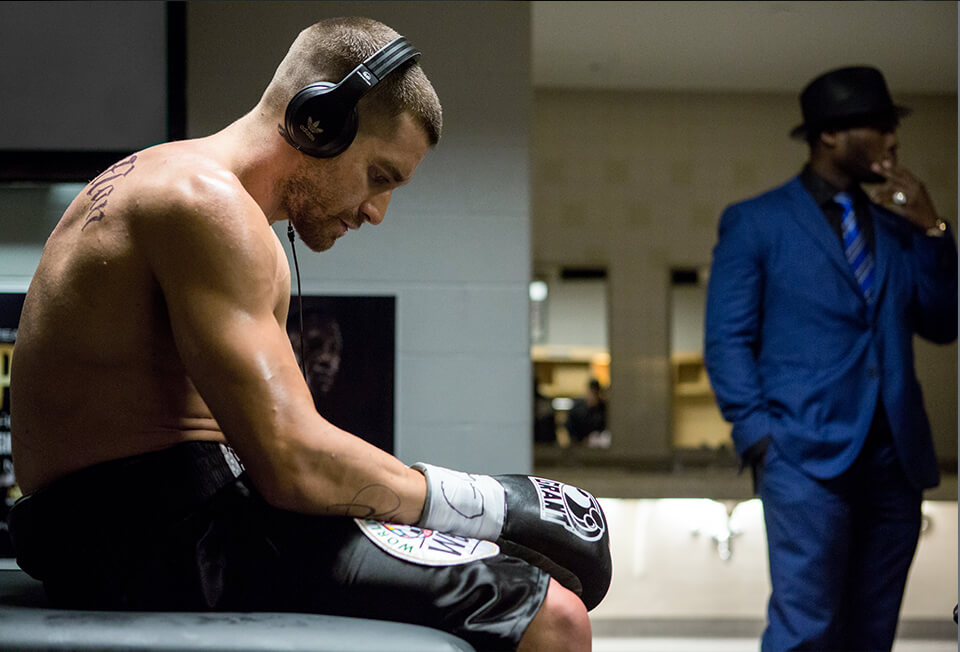 I immediately started thinking, ‘great, another movie where a boxer is torn between his love of the ring and his health.” Then, everything changes. Billy gets into a fight in a hotel, a gun is fired, his soul mate is killed, and he’s left to raise his young daughter Leila (Oona Laurence), alone. The downward spiral begins and soon, he loses everything because he’s completely lost to grief and anger.

This is a comeback story with a great set up and an insurmountable tragedy. I will say that the comeback pretty much sticks to formulaic, Rocky-like ‘wise older man teaches young angry dude how to live again.’

While the plot is strong, I have to say that much of the cast didn’t feel very human to me. Instead, it feels like they came out of the ‘character-o-matic’ by the corporate movie machine, designed to make Oscar bait. The dialog is too stagnant to really bring these characters to life, which is a shame.

Gyllenhaal is a slurry, stumbling trainwreck of a character. Maureen is your standard “stand by your man long suffering wife” and Jordan is a one dimensional sports agent who acts pretty much how you’d expect him to act. The actors do their best with the poor dialog they were given, but it still isn’t very strong, despite a compelling plot.

I’m torn on this one. I’d give this a strong score on plot, but less on execution. In a movie like this, character development is key and I just didn’t feel it. It’s a movie that should have a human touch, but instead feels like a poorly commercialized attempt at Oscar bait.

I can’t say I loved it, but I can’t say I hated it. Would I trouble myself to go all the way to the theater for it? Probably not. But if you can get it on demand, I’d give it a worth the watch.
WE GAVE IT : 3 STARS! Watch the Official Trailer and See the Official Movie Poster below

Despite its heavy marketing campaign, it appears that Cameron Crowe’s latest rom-com has flopped at the box office. I’m starting to think Crowe’s heyday was the late 90s, early 2000s, with films like Jerry McGuire and Say Anything. I have a feeling Vanilla Sky might have broken him, because I haven’t seen anything worthwhile come from him in a very long time.

Aloha is the final anchor pulling him into his downward spiral.

In present day Hawaii, with absolutely no Hawaiian people, Bradley Cooper plays Brian Gilcrest, a defense contractor who has returned to Hawaii for a space program job. Rachel McAdams plays Tracy, his former lady love who is now married to pilot Woody (John Krasinski). Just because, they dump in another love interest Allison Ng (Emma Stone) who is his Air Force handler. At first they don’t get along, then he decides to team up with her to stop evil mastermind Carson Welch (Bill Murray) who is there to launch a weapons satellite.

Yeah, that’s right. At the last minute, it gets really, really weird and turns into some kind of action thriller over a rom com. It’s like two short scripts crammed together for the purpose of making a movie and it didn’t work.

Despite the star studded cast, no one really pulls through in their rolls. Stone over acts, Cooper under acts, and Murray only shines in the comedic scenes, coming off as ridiculous when it comes to more dramatic moments.

I had no idea why Rachel McAdams was even there. It felt like she was just the requisite lab coat wearing love interest, but then you throw in Stone, and there’s no reason for the love interest. Too many characters were trying to be balanced when less would have done the job. 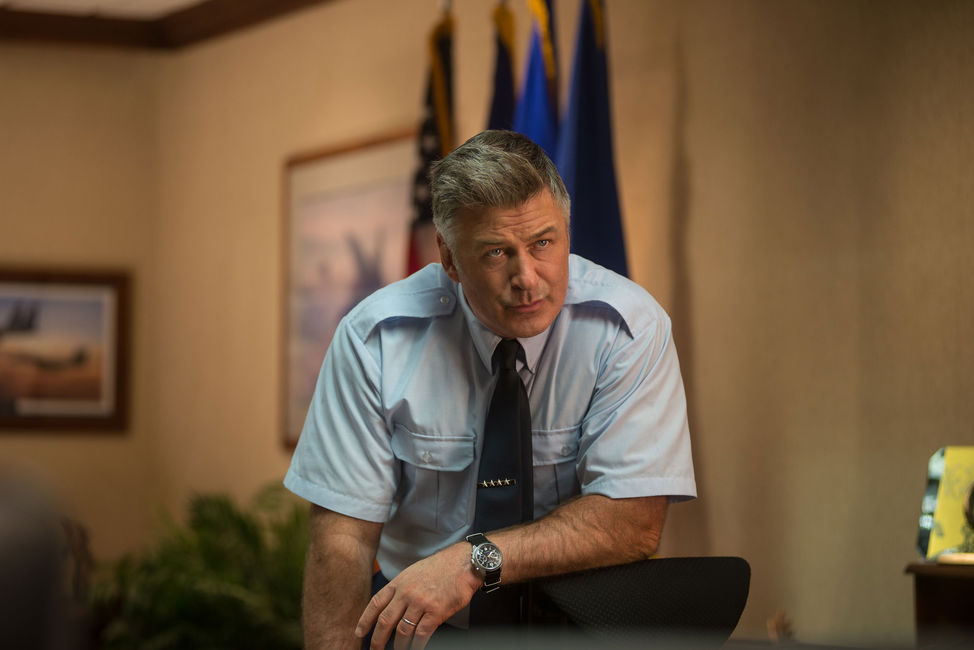 It feels like Crowe was trying to do something similar to A Foreign Affair, the 1948 romance that managed to balance a cynical look at the black market in post war Germany, with a lighthearted romance. The problem is, Crowe doesn’t seem to have Billy Wilder’s cynicism, and it comes through when the bad guy comes off as incredibly cartoonish.

Crowe used to know his way around a rom-com. He used to be able to balance the nefarious with the sweetness and light of a perfect couple. Like in Say Anything, where he hooked up the uptight girl, with the requisite bad boy, then gummed up the works by turning her dad into a guy who steals from disabled old people.

Aloha doesn’t have that seamless transition. It doesn’t have enough edge to truly pull off the darker parts of the film and it doesn’t have the chemistry to make people watch it for the romance. It’s just a messy, forgettable effort.

WE GAVE IT: 2 Stars – Watch the Official Trailer and Official Movie Poster below!