Yes. A ‘Life-Size‘ sequel is happening. Or really, it’s already happened. Life-Size 2 is set to premiere in December during Freeform’s 25 Days of Christmas.

As some of you may remember, the original ‘Life-Size’ premiered nearly 20 years ago in 2000. The movie starred Lindsay Lohan as a young girl who accidentally transforms her doll into the “perfect living woman.”

That woman being Tyra Banks, of course. And while Banks has returned to star in and produce this sequel, Lohan wasn’t able to return in a starring role because of her upcoming show on MTV.

“She has this new TV show on MTV about this club so she couldn’t make it, which was sad. [Lindsay] will be in the movie in some kind of way. We’ll see where that ends up.”

Banks’ new co-star will be Grown-ish’s Francia Raisa, and Banks revealed they went to a spa together before filming to see how their chemistry was, “That girl can act, it’s in her eyes,” Banks said.

I hate to admit it, but I kinda want to watch this sequel. I remember enjoying the first movie, but I was a lot younger back then.

Disgraced actress Lindsay Lohan has a new reality show coming out on MTV, so she’s been making the headlines recently, and of course she’s been saying dumb sh*t.

In a recent interview with British publication The Times, the 32-year-old former actress spoke about the #MeToo movement.

“Look, I am very supportive of women. Everyone goes through their own experiences in their own ways. If it happens at that moment, you discuss it at that moment. You make it a real thing by making it a police report. I’m going to really hate myself for saying this, but I think by women speaking against all these things, it makes them look weak when they are very strong women.”

Wait, what? Speaking out against sexual assault makes women look weak? HUH? Does she want them to just “walk it off” like they got hit in the back with a baseball? And does she also think people who speak out against racism or corrupt officials are weak? Should we all just keep everything inside because feelings and thoughts make people look weak?

Honestly. It’s not surprising Lohan thinks this way. You may remember that she actually defended Harvey Weinstein following the numerous sexual assault charges against him…

“I feel very bad for Harvey Weinstein right now. I don’t think it’s right what’s going on. He’s never harmed me or did anything to me. We’ve done several movies together. I think everyone needs to stop. I think it’s wrong. So, stand up.”

Wow. Great point. You know what…Harvey’s never touched me either. HE MUST BE A GREAT GUY IF HE’S NEVER DONE ANYTHING TO ME PERSONALLY!

Also, the Golden State Killer didn’t murder me, so I think everyone should leave him alone too. Same goes with Hitler. In fact, I’ve never been murdered, so let’s release all murderers from prison!

We knew Lindsay Lohan lost her mind several years ago, but we were under the impression she found it recently, but I guess we were getting #FakeNews.

But apparently, Lohan doesn’t believe it. While speaking in a bizarre accent, Lohan said she feels very bad for the 65-year-old film producer…

“Hi! I’m in Dubai. I’m home and I feel very bad for Harvey Weinstein right now. I don’t think it’s right what’s going on. I think Georgina needs to take a stand and be there for her husband. He’s never harmed me or did anything to me — we’ve done several movies together. I think everyone needs to stop — I think it’s wrong. So stand up.”

What is going on here? Well, either Lohan is truly stupid and doesn’t understand how Harvey could assault dozens of women while also being nice and respectful toward her, or she was assaulted by Harvey herself when she was younger and is too damaged to speak out.

Which one is it? No idea. By the way, she did delete the videos before their 24 hours were up, so maybe she was just drunk. 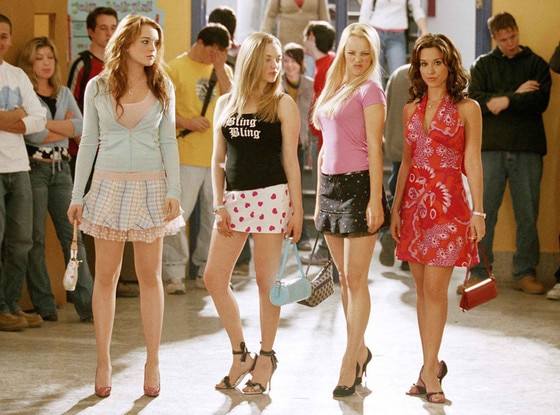 Lindsay Lohan is still a person, and she still has hopes and dreams like everyone else. The 30-year-old actress, who has never recovered from her meltdown years ago, wants to get back in the spotlight.

And she knows how she’s going to get there. She sat down with CNN for a Facebook live chat on Thursday morning and revealed she has been pushing hard for a sequel to the 2004 hit Mean Girls.

“I have been trying so hard to do a Mean Girls 2. It is not in my hands. I know Tina Fey and Lorne Michaels and all of Paramount [Pictures] are very busy. But I will keep forcing it and pushing it on them until we do it.”

She’s super serious about this. It’s not like she’s just sending a few emails saying, “Hey, about that sequel…”

Nah, she’s invested. She has done some writing for the sequel and even has a few ideas for new additions to the cast.

“I would love to have Jamie Lee Curtis and Jimmy Fallon in the movie. I’ve already written a treatment for it, so I just need a response.”

Jimmy Fallon? Well, f**k yeah then. That’s what this sequel needs. You know, when I watched the first movie I was like, “This is funny, but it’d be funnier if Jimmy Fallon starred in it.”

I can’t wait for this sequel now. Hopefully Kevin James and Rob Schneider get an invite too.

I’m not afraid to admit that one of my favorite Disney movies is a film about a Barbie-like doll coming to life. My 9-year-old self enjoyed the heck out of Life-Size, which featured this tagline, “She was a perfect doll. Now she’s the real thing.”

Tyra Banks played the perfect doll Eve in the movie, and Lindsay Lohan played the young girl who simply wanted her mother to come back to life. This was directly following her successful role in The Parent Trap, but it was before she became a star with Get A Clue, Freaky Friday and Mean Girls.

For several years now, the Disney Channel network has been teasing fans with a potential sequel. It was reported in 2012 that casting had started for the sequel, but everything was pushed back because the network wasn’t comfortable with the script.

But now it looks like everything is perfect, or at least as perfect as it can be with a script. Variety confirmed the news of the sequel with Tyra Banks, and she confirmed that she will be returning as Eve.

“There is no one else that can play Eve but me, thank you very much! I’m just joking with you, but yes, I am going to be Eve.”

Sadly it doesn’t look like Lindsay Lohan will return. Banks said they have not started casting for “the young person that will be the new owner of Eve.” As of right now, it looks like the movie could be released in late 2016, maybe around next year’s holiday season.

Banks believes it will be a blockbuster on TV…

“I’m really excited about it. I think ‘Life-Size’ is so popular that it can be a feature film because it has such a cult following, so I’m really interested to see what the ratings are going to do for that. I think it’s going to be a blockbuster on TV.”