The land of dinosaurs continue in the sequel to Jurassic World. The first trailer for Jurassic World: Fallen Kingdom premiered during Thursday Night Football, and now it has been released online for your viewing pleasure.

Both Chris Pratt and Bryce Dallas Howard have returned to their roles as Owen and Claire, and you know who is also returning? Jeff Goldblum. That’s right, the OG Dr. Ian Malcolm.

So what will this sequel be about? We will let The Verge explain:

“The film is set after everyone escaped from the former theme park on Isla Nublar. The trailer opens with the park’s former manager, Claire Dearing (played by Bryce Dallas Howard), catching up with Owen Grady (Chris Pratt), who’s trying to convince him to come with her as she returns to the island. It seems that a volcano on the island has begun to erupt, and the dinosaurs that InGen brought to life are in danger of being wiped out.

Claire heads up a group dedicated to saving their creations, the Dinosaur Protection Group, and the plan seems to be to bring the dinosaurs off the island to safety.”

Well, that sounds like a lovely idea. The film is set to be released June 22, 2018, and you can bet it’ll make loads of money. Jurassic World brought home over $1 billion at the worldwide box office.

A free trip to Hawaii would be enough to get me excited, but when you add in the opportunity to meet and hang out with Chris Pratt on the set of Jurassic World 2? Well, I might just jump right out of my pants.

Pratt is offering up a little charity competition. To enter the contest, all you need to do is donate $10 to the orthopedics department at Seattle Children’s Hospital.

He got the idea for the contest after meeting 14-year-old Makenna Schwab, a patient at the hospital with a rare connective tissue disorder called Larsen Syndrome. Makenna has received several life-saving surgeries at the hospital, and Pratt knew this would be the perfect way to help and raise money.

And the great news is you can enter more than once, so if you give $100, you’ll get 10 entries in the competition. In a video posted to Pratt’s social media accounts, he told his followers…

“It’s a great cause. We’re raising a ton of money for the Seattle Children’s Hospital. It’s a good thing to do, so even if you don’t win the contest, you’re getting great karma points.”

Here is a link to the donation page, and we have included the details of the prize for you below. You got 27 days to enter…GOOD LUCK! 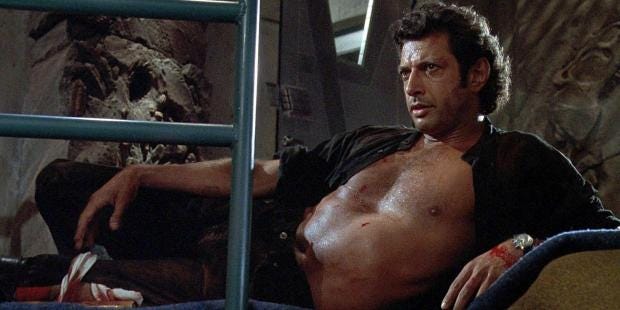 The living meme Jeff Goldblum is ready to cash in. He has somehow survived two bouts inside the world of life-threatening dinosaurs, and now he’s going in for round three.

The 64-year-old actor has officially signed on to reprise his role as Dr. Ian Malcolm in the upcoming sequel to Jurassic World.

He will be joining returning stars Chris Pratt and Bryce Dallas Howard. No word on how big his role will be, but we’re willing to bet it’s a minor role.

Last year, Goldblum spoke to Fandango about the possibility of returning to the franchise, and this is what he had to say…

“I’m nothing if not open. I’m like an open-faced sandwich. My door is not always open—I took the door off. I removed the hinges from the door. I’m too open. I’m like a chicken piccata. What was I about to say? Oh yes, the two [Jurassic Park] movies I did with them were plenty. If I never did anything more, I’d certainly be well satisfied.”

Ah, you gotta love the Goldblum. No one has embraced a meme quite like him. We’re glad they invited him back for Jurassic World 2.

The sequel, which is being directed by J.A. Bayona, is scheduled to hit theaters June 22, 2018.

Well, we’ve already made one post today about a franchise that refuses to die, so why not make one more? The director of Jurassic World 2, J.A. Bayona, tweeted out the first official image from the Jurassic World sequel this week.

In the photo above, a young girl stands in front of a collection of dinosaur skeletons. No information was released with the photo, so we don’t know who this girl is. Some people are wondering if it might be the daughter of Claire (Bryce Dallas Howard) and Owen (Chris Pratt) but that seems like a stretch.

This ominous photo matches what producer/screenwriter/original director Colin Trevorrow said about this sequel. He promises it’s going to be “more suspenseful and scary,” and it will not focus on militarized dinosaurs, which is a good thing.

Honestly, I hate to admit it, but I’m really looking forward to this movie. I enjoyed Jurassic World. I don’t think it was a great film, but it was highly entertaining to watch inside a theater. I’m sure if I had watched it at home, the enjoyment level would have decreased significantly.

The sequel to Jurassic World won’t start filming until early 2017, but that hasn’t stopped the hype train from leaving the station. The internet is already discussing the movie as if they have already watched it. Rumors are flying all over the place.

We have heard that Jurassic World 2 will be scarier than the first movie, and it’s also rumored to be one of the most expensive films ever. But that’s mainly just speculation. What do we know for sure? Well, we know the upcoming sequel will be directed by J.A. Bayona, and we know Chris Pratt and Bryce Dallas Howard will return to star.

And thanks to the director of the first film (co-writer of the sequel) Colin Trevorrow, we know Jurassic World 2 will deal with animal abuse.

He told Time the following:

“The dinosaurs will be a parable of the treatment animals receive today: the abuse, medical experimentation, pets, having wild animals in zoos like prisons, the use the military has made of them, animals as weapons. The second part will be a very different movie that will explore new paths. For that reason, it was clear that it needed to be Bayona who would direct it, in order to have it grow and evolve with his very personal vision.”

I think everyone involved is handling this franchise the right way. I mean, Jurassic World made over $1 billion at the box office. It would be so easy to stick with the same director, create some boring script that has no meaning, and then watch the money come flying in again.

But instead, they are changing directors, changing themes, and working together to create something truly special.