And he’s going to have an incredible cast to work with. We know that both Idris Elba and Tilda Swinton have agreed to star in the film.

Not much is known about the mysterious epic, but according to Deadline it’s “said to be unlike anything the filmmaker has done before,” which will either make you excited or terrified. I mean, the dude’s last two films were Mad Max and and Happy Feet Two, so what hasn’t he done?

Some sources say this movie will be a love story featuring a genie, but I’m not sure if that’s been confirmed yet.

We will keep you posted as more information is released. Keep your eyes out for this one, folks. It could be something special.

By the way, Elba is currently filming the ‘Fast & Furious‘ spinoff ‘Hobbs and Shaw‘ with Dwayne Johnson. You can find Swinton in the fantasy/thriller, Suspiria.

We have some good news to report this Friday. You may remember hearing earlier this week that director George Miller was finished with the Mad Max franchise. We even reported the news a few days ago. It was pretty shocking for Mad Max fans around the world, especially when you consider the success of Fury Road.

But now we are happy to report that Miller is still planning on making two more Mad Max films. The director clarified his comments yesterday by explaining the reporter didn’t understand what he was trying to say.

“That was a completely garbled interview. I was in New York and it was so noisy and the journalist was asking me questions on a red carpet at the National Board of Review. She completely got the wrong fragments of information that were just not true. I said no, [another Mad Max movie] will not be next, and she took that to mean I never wanted to make another Mad Max. It won’t necessarily be next, but I have two more stories.”

Basically, the reporter thought Miller said he wouldn’t be returning to wasteland, but all he really said was that he wanted to work on a separate project before returning. He simply needs a break, which is certainly understandable because filming these Mad Max films are not easy.

This news should be enough to power you through the final hours of work before the weekend. You are welcome.

Earlier this month, it seemed like George Miller was considering a return to the Mad Max universe. He told Entertainment Weekly that Charlize Theron‘s Furiosa was a “pretty compelling character” and would make for a great Mad Max spin-off film.

And he still might believe that, but after hearing the comments he gave at the Golden Globes, it’s clear he doesn’t want to be the one directing the potential spin-off.

“I won’t make more Mad Max movies. I’ve shot in Australia in a field of wild flowers and flat red earth when it rained heavily forever. We had to wait 18 months and every return to the US was 27 hours. Those ‘Mad Maxes’ take forever. I won’t do those anymore.”

We all knew filming Fury Road was brutal, but it certainly seemed to be worth it. It’s already received several awards and it was just recently announced as the best-reviewed film of 2015 by Rotten Tomatoes. It scored an incredible 97% rating on the site.

But we must remember Miller will be 71-years-old in just a few months. He’s had a ridiculously successful career in Hollywood. Why not end one of his most beloved franchises on the highest of notes? You can’t blame the guy. 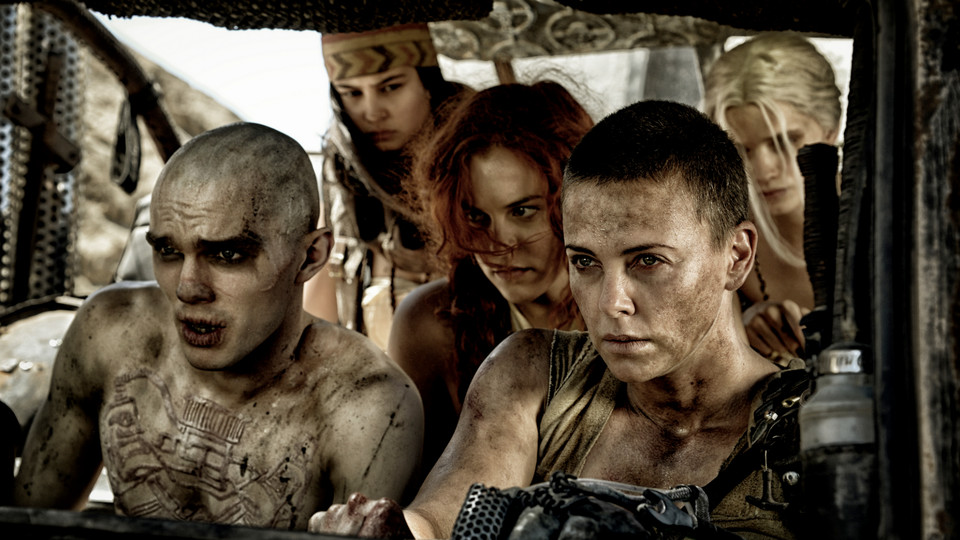 After the success of this summer’s Mad Max: Fury Road, most everyone assumed we would be getting another sequel. And now it looks like we no longer have to assume. Another film in the franchise appears to be a sure thing at the moment, but there is still some confusion surrounding the project.

Apparently, there are two competing sequel scripts floating around out there, and no one knows which one will get made, not even director George Miller.

During a recent interview with Top Gear, the directed admitted Warner Bros. was interested in producing the two scripts…

“So we ended up with two scripts, without really trying. We’re talking to the studio about it as we speak, but which one of the two stories will happen next, I’m not so sure. I want to do a small film without special effects before I do any of that, just to do it quickly. We shot Fury Road for eight months… that’s a lot. Every day in the heat and the dust, doing these stunts, it’s very wearing. We’ve got two more planned, but at some point in the future.”

As you can see from the quote above, it doesn’t look like he’s in a rush to film the project. It will probably be at least three years before another Mad Max film is released, but that’s okay! The long wait works for a series like this.

We’ll keep you posted on the sequel news, but like we said, it could be a long wait.

It’s only September, but George Miller‘s Mad Max: Fury Road is already taking home some impressive awards. The International Federation of Film Critics has named it the best film of 2015, awarding it the organization’s annual Grand Prix.

The 493 members nominated films released after July 1, 2014, and then selected from four finalists. The three other finalists for 2015 were, Son of Saul, The Assassin, and Taxi. Miller will accept the award at the San Sebastian Film Festival later this month. The celebration begins on September 18.

This certainly won’t be the last award for Fury Road. The fall film festival season is about to kick off, which means Mad Max will have some new competitors to watch out for in this upcoming award season, but it’s going to be hard for any film to receive better reviews than Mad Max: Fury Road.

It’s currently sitting at a 97% on Rotten Tomatoes. 291 fresh reviews and just 9 rotten reviews, and those 9 critics must have been in a rotten mood while watching the movie.

If you still haven’t watched this film, I have some good news for you. It’s now available to purchase on Blu-ray, DVD and digital download. You should definitely watch it this weekend.

We are sure you all heard the recent big news surrounding Man of Steel 2. Rumors started to spread about Mad Max: Fury Road director George Miller taking over the Man of Steel franchise. This obviously had some fans jumping up and down.

But those fans might get tired of jumping before the next film is released. The movie isn’t officially on Warner Bros. Pictures’ schedule for their DC Comics cinematic universe. And this schedule stretches five years into the future! So what the heck is going on?

Den of Geek is reporting that while WB is still interested in bringing Miller on board to make a DC film, they are not so interested in developing Man of Steel 2. Sources claim the project is on “permanent hold.”

Sadly, the sources didn’t really explain what that means exactly. It could be something simple. Maybe they just have too much on their plate right now to give the project the attention it deserves. We are sure Superman will get his own adventure again soon, you know, if you consider 5-10 years to be soon.

Hopefully the rumors of Miller directing the project are true. That would get me excited to watch this film. If he’s not going to direct it, then I honestly don’t care how long it takes to get made.

Fans of the ‘Mad Max‘ franchise had a wonderful weekend. Mad Max: Fury Road hit theaters and earned a nice weekend total at the box office, bringing in $109.5 million worldwide. Reports say production costs were around $150 million, so it’s likely the film will earn it all back.

That’s great news for fans wanting more Mad Max. It’s still not clear if the studio is ready to commit to another film, but we know director George Miller is ready. He admitted that he has already completed a script for the sequel.

And just recently, he revealed the title of the followup would be, Mad Max: The Wasteland.

“We’ve got one screenplay and a novella. It happened because with the delays [on Fury Road] and writing all the backstories, they just expanded.”

So, would Charlize Theron be returning? Because we know that’s the question everyone wants to ask. She is one of the main reasons this latest film has been so successful, but even if her character is included in the new script, it doesn’t look like the actress wants to return.

She told Esquire that shooting the film was brutal…

“We shot a war movie on a moving truck — there’s very little green screen. It was like a family road trip that just never went anywhere. We never got anywhere. We just drove. We drove into nothingness, and that was maddening sometimes.”

We’ll see what happens. For now, the best way to guarantee a sequel is to convince everyone you know to watch this movie in theaters.