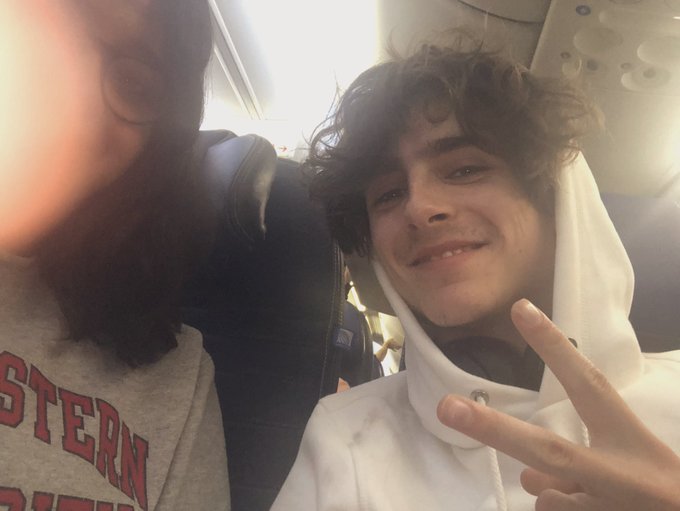 When flying economy, you don’t expect to have a celebrity sitting next to you. In fact, you probably expect some overweight man named Bruce and his support parakeet.

But one lucky girl on a 3 hour flight found herself sitting next to Oscar nominee Timothee Chalamet. That’s right, one of the hottest movie stars in the world was flying economy class and was nice enough to have an hour long conversation with a fan.

The girl, Alankrutha, noticed Timothee almost immediately. At around 30 minutes into the flight, she told him, “hey you look exactly like Timothee Chalamet.” He smiled and simply said, “I get that a lot.”

Alankrutha assumed he didn’t want to be bothered, so she went back to minding her own business…aka googling his name to make sure it was indeed him. An hour later, Timothee asked her if she knew when their flight was scheduled to land. That’s when she couldn’t hold it in any longer, “I know you’re Timothee!” she said. He laughed and admitted he was indeed the famous actor.

From there, they had an hour long conversation about life, Timothee’s co-stars, and The Office.

List of actual questions my dumb bitch mind asked him that he answered super patiently:
1. Why are you sitting in economy class (he laughed and said how dare you)
2. Have you met Beyoncé (he has not)
3. How is Steve carrell (he said he’s amazing and offered to FaceTime him!!)

What shocks me the most is this dude wanted to know about me. He asked me what I do, what project management is about (literally who cares timothee), where I grew up and PRONOUNCED MY NAME RIGHT pic.twitter.com/Z57pj2T2SS

And whenever he asks me about my life, I’m like !!!!!!! Why do you want to know about an IDIOT like me!!!!! He asks about India, name drops armie hammer (ofc why wouldn’t he) and tells me about his life growing up and how he got into films

Major things I forgot to mention:
1. When the stewardess offered him flight pretzels & orange juice, he scarfed them down in < 20 secs like he hadn’t eaten in 48 hours
2. He asked if I was expecting him to be taller or shorter- I said shorter (shut up @ me)
3. He loves easy A

Check Out The Great Timothee...