Dave Bautista, Zoe Saldana And Chris Pratt Show Strong Support For James Gunn After He Was Fired From ‘Guardians of the Galaxy’ 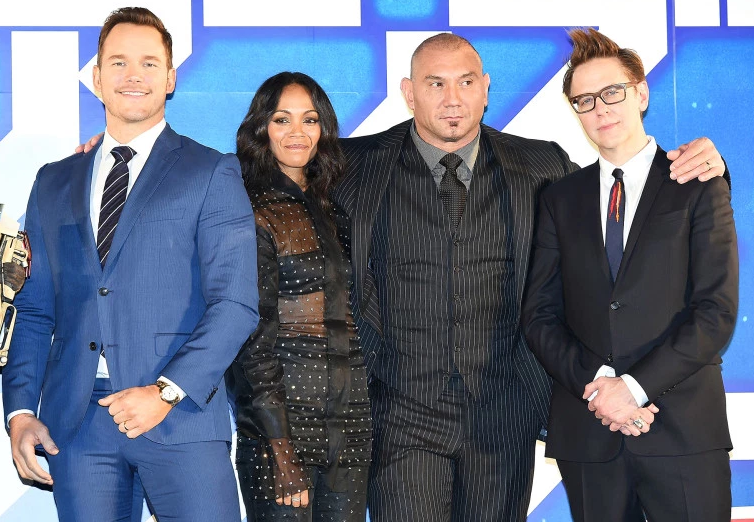 We left you last week by informing you that James Gunn had been removed from ‘Guardians of the Galaxy 3‘ after tweets he posted 10 years ago resurfaced. In the tweets, he joked about rape, 9/11, AIDS, and several other controversial subjects.

When the tweets went viral last week, Disney decided to remove him from the Guardians of the Galaxy franchise, which was quite shocking because he directed the original film and its sequel.

The stars of the franchise, Chris Pratt, Zoe Saldana, and Dave Bautista appear to be putting their support behind Gunn.

Bautista was the first star to speak out. He sent out the tweet you see below on Friday…

I will have more to say but for right now all I will say is this..@JamesGunn is one of the most loving,caring,good natured people I have ever met. He’s gentle and kind and cares deeply for people and animals. He’s made mistakes. We all have. Im NOT ok with what’s happening to him

Saldana and Pratt didn’t speak out until Sunday, and they weren’t quite as obvious with their support as Bautista, but it’s clear to see they still love and respect Gunn.

It’s been a challenging weekend I’m not gonna lie. I’m pausing myself to take everything in before I speak out of term. I just want everyone to know I love ALL members of my GOTG family. Always will.

“Understand this, my dear brothers and sisters. Let every person be quick to listen, slow to speak, slow to anger.”

Another star from the franchise, Michael Rooker, took things to a new level. He announced that he was quitting Twitter because he’s tired of all the bullsh*t.

“This account will be inactive after today. We’re very tired & upset over the ongoing BULLS–T… neither I nor my rep will use Twitter again. Twitter sucks and I want nothing to do with it. Thank you to all who gave kind words & support. See you on Instagram.”

Damn. I guess that’s one way to show your frustration.

James Gunn Is Returning To...