Baseball Is Back: The Top 5 Baseball Films Of All Time!

Football may be dominating the ratings on television, but baseball will always be number one in my heart. That’s probably because it was the only sport I was really good at playing, unless we are ready to count bowling as a real sport.

There is just something about going to the park and watching a baseball game. A lot of people think baseball is boring, but I think they just don’t understand it. If you truly understand the game, then there is no way you could find a baseball game boring.

Sure, there could be a few boring moments, but there is a little bit of excitement in every single game. You just have to be watching for it.

Hollywood understands it. Baseball films are being made all the time. In fact, I think most people enjoy movies about baseball more than they enjoy the actual game. I could probably make a personal top 50 baseball films list, and yes that list would include “silly” movies like Rookie of the Year and Little Big League.

But no one has time for that, which is why I did my best to limit myself to just the top 5 baseball films of all time. I already know many of you will disagree with this list, especially with my choice for number 4.

I’m sorry if I disappointed you.

Why I Love It: This film was made with love. Billy Crystal really did a wonderful job, and his passion for the Yankees he knew and loved shows up in every scene. It’s not the most popular baseball movie, but it deserves to be on this list. And this is coming from a Texas Rangers fan.

Why I Love It: Okay, okay. I know some people consider this one of the worst baseball films ever made, but I completely disagree. Is it silly? Of course it is! But I have this strange connection to Angels in the Outfield. It’s one of those films I never get tired of watching. And even though the story might be outrageous, there are some great characters. Danny Glover was wonderful, Joseph Gordon-Levitt (Roger) and his buddy J.P. really make you believe it can and will happen. Oh, and what about the late Taylor Negron as Nacho Butt? Come on now! IT’S A GREAT MOVIE! STOP MAKING ME FEEL BAD!

Why I Love It: It blends two of my favorite things (comedy and baseball) together perfectly. And not in the silly, Rookie of the Year way either. Don’t get me wrong, that “Funky butt-loving” line still makes me laugh, but it’s not something I would share with my friends. Major League is the baseball comedy for adults. Another thing the movie has going for it? Bob Freakin’ Uecker.

Why I Love It: Who doesn’t love this movie? It reminds you why we started playing baseball in the first place. We just did it because we loved it. We enjoyed hanging out with friends, making stupid jokes, and pretending we were playing in the majors. This movie is so much more than baseball. It makes you feel like a kid again every single time you watch it. It’s also probably one of the most quotable movies on this list. And even in 2015, kids are still learning from Squints. 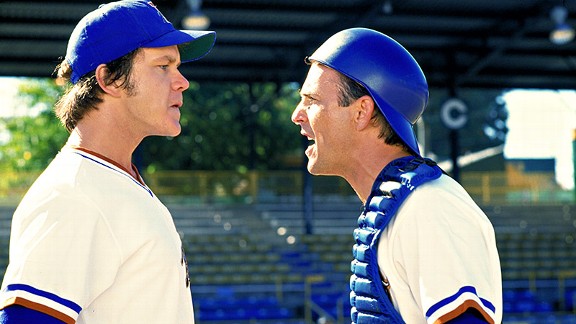 Why I Love Them: Did you honestly think Kevin Costner wouldn’t make this list? He is the king of baseball films, and this list wouldn’t be complete without his two best performances. Yeah, this means I actually picked six favorite films and not five, but what was I supposed to do? Both films deserve the number one spot, and I don’t even need to explain why. You all should just know, and if you don’t know, please click on the links below.

The Yankees And White Sox...